The Virginia Law Enforcement Professional Standards Commission was established in 1993, and tasked with creating an accreditation opportunity specific to Virginia law enforcement. Since that time, the Commission has overseen the development of a comprehensive, efficient, and viable process that can assist Virginia’s law enforcement community in the development and certification of policy and procedure. The accreditation process is not mandatory and only 92 out of 417 agencies in the state of Virginia hold that honor.

Being an accredited agency is an ongoing program for the Charlotte County Sheriff’s Office that began in January 2005. The Virginia Law Enforcement Standards Commission sets forth the highest of standards to be followed. Even though the terms run four years, proper documentation and inspections are done and accounted for on a yearly basis. There are 190 Standards, which include Administration with 242 proofs, Operations with 268 proofs, Personnel with 86 proofs and Training with 24 proofs totaling 2,480 proofs for a four-year term. The proofs and documentation used came from the day-to-day activities and operations of the jail/dispatch staff, the road staff, the tactical team, investigations, evidence custodians, school resource officers and supervisors. 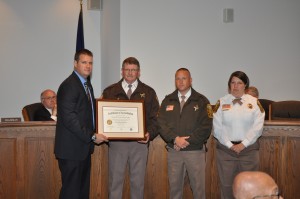